This is a relief sculpture that portrays “The Spirit of the Pioneers.” You'll see many relief sculptures in the Capitol, but this is the only one with gold leaf added to the background. The gold represents the setting sun. The pioneer family is following the setting sun to the west. The bird near the ox's head is the Eagle of Destiny, and is also the symbol for the United States. Meanwhile, the ox is digging up a bison skull. What does that part of the image suggest to you?

The bison skull is one of the symbols in the sculpture that tells you that these people are in Nebraska. The ox has a bundle of maize on his back-- a form of corn. A pioneer family walks beside the wagon. You see an old man finding water, a young man carrying a basket of seeds representing agriculture, and a mother carrying a baby. The pioneer father has a gun to protect the family. That part of the image is there to make you think of the state's protections for its citizens. The man on the horse leading the group is Buffalo Bill Cody. 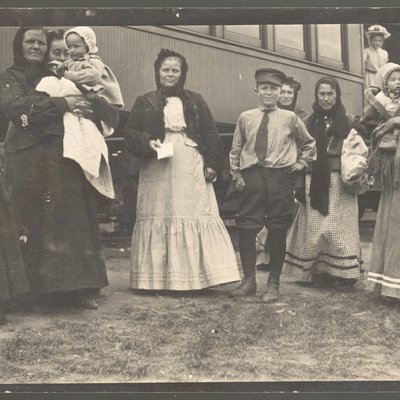 People came to Nebraska on foot, in wagons, and on horseback. Later they traveled here in many other ways -- on steamboats, on stagecoaches, in railroad trains.  They came for many different reasons.

The first people came to Nebraska to hunt and live. European explorers came next. Each explorera person who explores an unfamiliar area; an adventurer who passed through claimed Nebraska for his own country.  Next, eastern Americans explored and mapped the area.  After that, many of the people who came into Nebraska were on their way to other places, like Colorado and California. 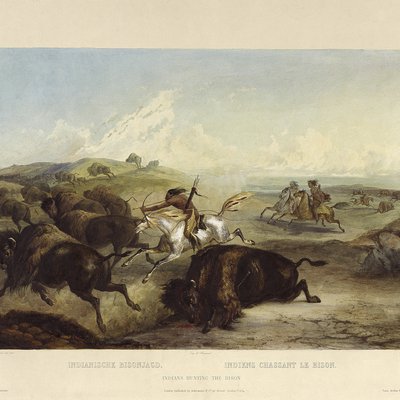 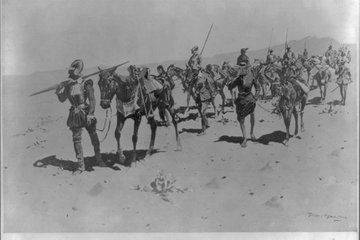 Francisco Vasquez de Coronadoa Spanish conquistador and explorer who led a large expedition from Mexico to present-day Kansas through parts of the southwestern United States between 1540 and 1542 claimed Nebraska and other territories for Spain in 1541, but the Spanish never sent settlers to follow him. 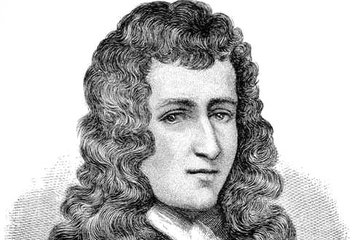 Rene Robert Cavalier, Sieur de La Sallea 17th century French explorer and fur trader in North America, that explored the Great Lakes region of the United States and Canada, the Mississippi River, and the Gulf of Mexico, included Nebraska in the territoryTerritory has more than one meaning. A territory can be just an area of land. In this case, territory means an area of land that is ruled by another government. Nebraska was not considered part of the United States at this time. he claimed for France in 1682.  He called the land "Louisiana" in honor of King Louis XIV. 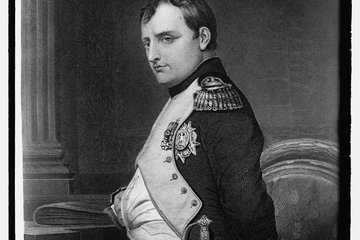 The Spanish and the French fought over the area and it changed hands until Emperor Napoleon Bonapartea French statesman and military leader of Italian descent who rose to prominence during the French Revolution and led several successful campaigns during the French Revolutionary Wars forced Spain to return it to France. Then Bonaparte sold the territory to the United States in 1803.  This was known as the Louisiana Purchasea land deal between the United States and France, in which the U.S. acquired approximately 827,000 square miles of land west of the Mississippi River for $15 million. 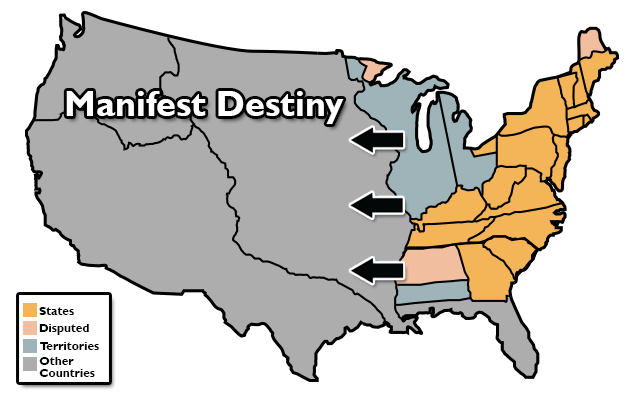 In the 1800's, the idea caught on that the United States was naturally going to expand its territory.  This was known as Manifest DestinyThe belief that the U.S. was supposed to expand its borders all the way west to the Pacific Ocean..  Thousands of people from the eastern U.S. started moving west of the Mississippi River.  Some people thought the country was supposed to grow westward.  In the early part of the 19th century, though, Manifest Destiny was not inspiring many people to venture into Nebraska and other parts of the Louisiana Purchase.  However, some people did come to explore Nebraska and to take part in the growing fur trade. 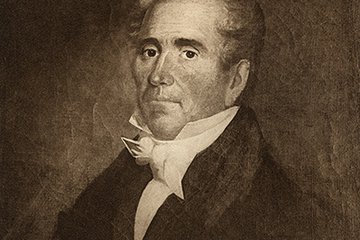 Meriwether Lewis and William Clarkare the most famous explorers in U.S. history, best known for their expedition (the Corps of Discovery) from the Mississippi River to the West Coast and back visited the eastern edge of Nebraska. Lt. Zebulon Pikewas an American brigadier general and explorer for whom Pikes Peak in Colorado was renamed passed through south-central Nebraska on his explorations. Manuel Lisawas a Spanish citizen who became an American citizen and a land owner, merchant, fur trader, United States Indian agent, and explorer, a Spanish American trader, established trading posts. 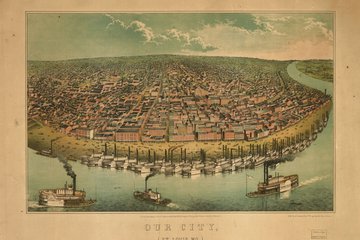 More travelers and fur traderswas one of the earliest and most important industries in North America continued to come to Nebraska, taking advantage of the steamboat travel on the Missouri River. 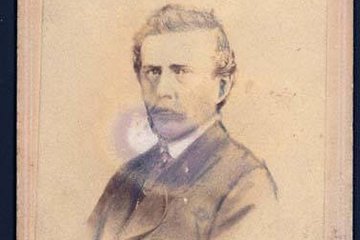 MissionariesPeople who teach their religion to people of a different culture, usually in a location far away from the missionary’s original home. came, too.  The first to live in the state were the Reverend Moses Merrill and his wife Eliza Wilcox Merrill, who settled in Bellevue in 1833. 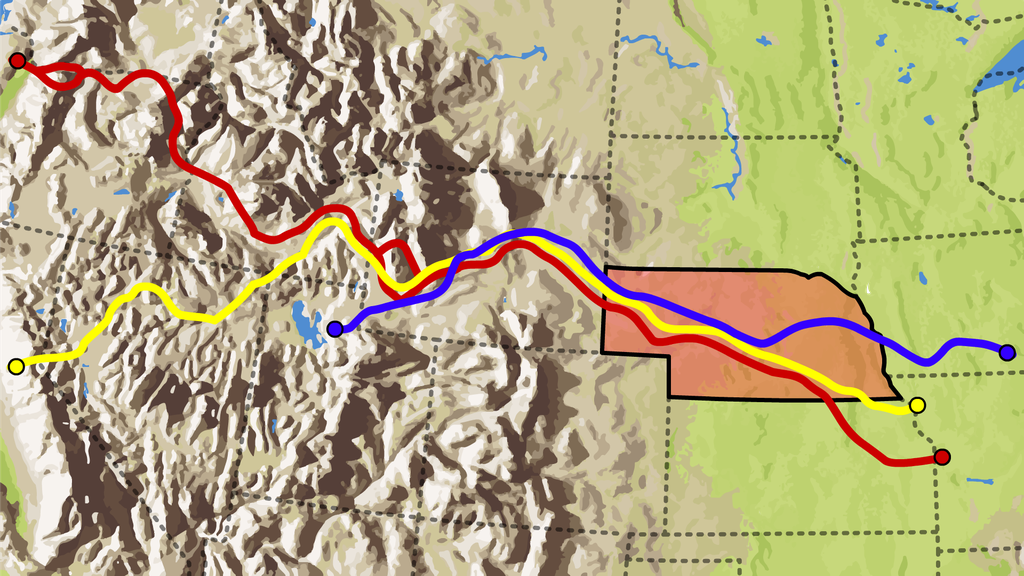 By the 1840's a "Great Migration" through Nebraska was underway, as pioneers followed the Oregon Trail, the California Trail, and the Mormon Trail.

At first, the U.S. government prevented white families from settling in Nebraska, planning to leave that land in the possession of Native Americans.  But as interest in building a transcontinental railroadA railroad that goes all the way across the continental United States, from the east coast to the west coast. grew, plans for Nebraska changed. 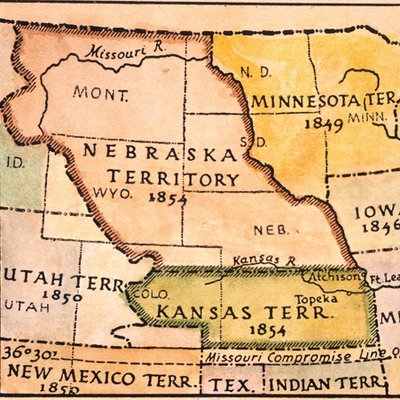 Nebraska was opened to settlement for non-Native Americans in 1854 when it became a territory.  This attracted farmers hoping to make a living on the land.

Continental European immigrantsAn immigrant is a settler from a foreign land. came for many reasons.  The Homestead Act of 1862Under the Homestead Act of 1862, the government sold land in the western territories to new settlers at low cost. attracted many to the area to take advantage of the chance to gain ownership of land by working on it. Instead of the limited amount of overworked land that could be inherited or purchased in Europe, Nebraska seemed to offer much more “new,” unworked land.  And the land in Nebraska didn't cost much.

Some immigrants wanted a chance to get away from a changing government. (For example, the Germans from Russia first went to live in Russia for a better life, then found the government was taking their freedoms.)  Some came to escape religious persecutionBeing jailed, punished, or ridiculed for personal religious beliefs that might be different from the majority of people in an area. in their old countries. 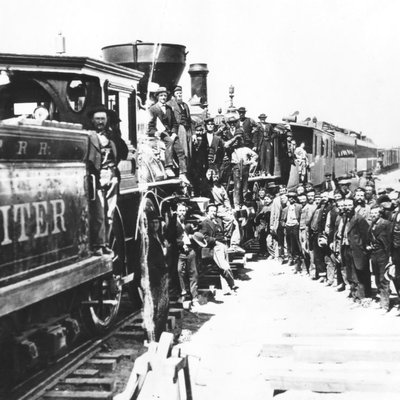 As the railroads reached across Nebraska, towns were created around sidings and depots a place for the storage of large quantities of equipment, food, or some other commodity.  The railroads advertised in Europe, encouraging farmers to come to Nebraska.  They brought whole colonies of immigrants from Germany (the largest group), Denmark, and Sweden, selling them land for settlement.

The African American population of Nebraska was 82 in 1860.  It rose to 6,269 by 1900.  Many lived in Omaha and worked for the railroads, the packing houses, or in other fields.  But according to the 1910 censusa count for official purposes, especially one to count the number of people living in a country and to collect information about them, there was one African American physician and surgeon, 25 African American musicians and teachers of music, and 14 African American clergymen in the state.  African American organizations and newspapers came into being in the 1880's and 1890's. 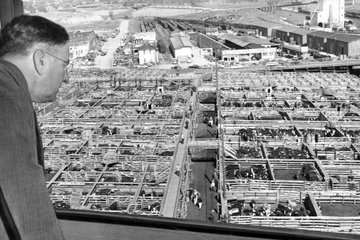 After the Civil War in 1864, some African Americans came to Nebraska seeking work.  Most moved to Omaha because of the opportunities for employment there and because there were very few jobs for them in the Old South, where they had been slaves. 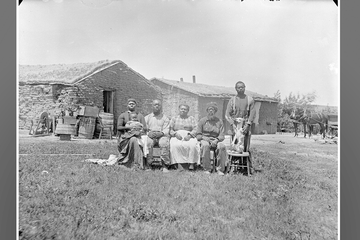 Robert Anderson was the first African American person to homestead in Nebraska.  He staked his claim in Box Butte County in 1870.  Other homesteaders who were African American included L. B. Mattingly who lived near David City; David Patrick in Hamilton County; and the Speece and the Shore families, who lived in Custer County. 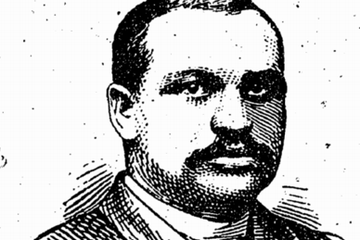 Dr. Matthew O. Ricketts was the first African American to serve in the Nebraska Legislature in 1892. 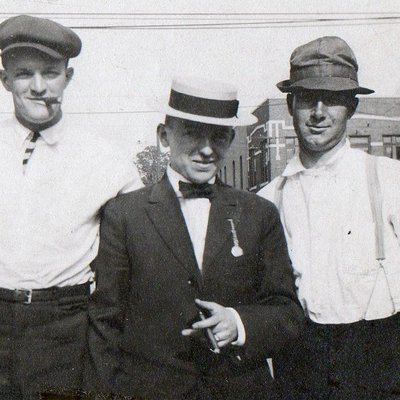 Irish immigrants who came to build the railroad sometimes stayed on to work in Nebraska.  Irish, English, Welsh, and Scottish immigrants often chose to settle in urbanOf a city or town. areas.  These groups came to Nebraska because of famineWidespread lack of food. or extreme poverty in their old countries.

source: Nebraska Moments: Glimpses of Nebraska's Past, by Hickey] 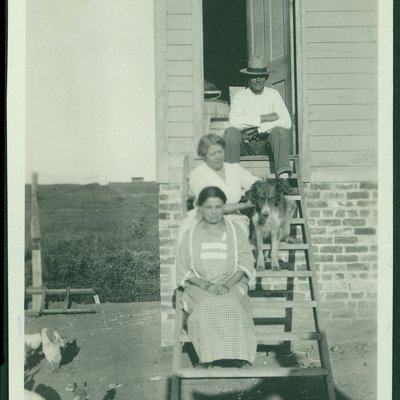 Many of the European immigrants had lived in the eastern United States.  Most settled in the ruralOf the country. parts of Nebraska, rather than in the cities and towns.  They formed close-knit groups in various parts of the state that have lasted more than a century.  By 1880, half of Nebraska’s population was either foreign-born or had at least one parent who was foreign-born.

The continental Europeans (Germans, Swedes, Czechs, etc.) came from a tradition of agriculture, and were attracted by opportunities to farm in Nebraska.  It seemed they could maintain their culture, their native language, and their traditional religion. The physical distances sometimes made it hard to form the kind of communities they wanted.  They were able to build and gather in churches, which became important in their social lives.  They had foreign language newspapers and some cultural organizations.

Gradually, Nebraskans of European origin let go of the need to maintain a separate language and a separate community.  They retained and passed on attitudes that lasted through later generations about public morality, family values, self-help, and the value of hard work.

What would make your family move to a new place?